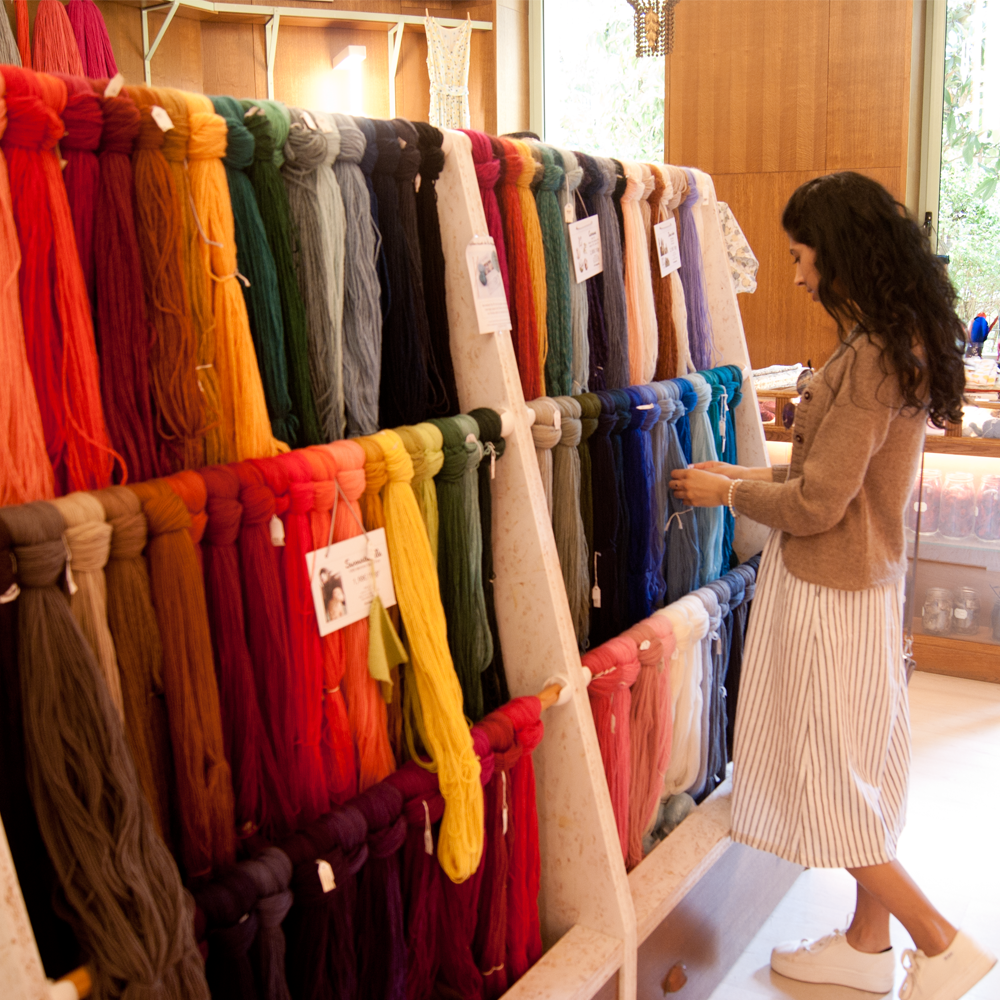 A Kaleidoscope of color and luxurious crafting materials that exudes French charm.


There are three things I look forward to when traveling – beautiful views, good food, and unique yarn stores. So when my boyfriend and I booked a trip to Nice over a long holiday weekend, I immediately took to Google to research the yarn offerings in the area.

There were quite a few retailers selling yarns I don’t have easy access to in Norway, but one store in particular stood out for its bright, bold homespun yarns – La Droguerie. Started in Paris by two best friends in 1975, La Droguerie has expanded to several cities across France (and even some in Japan!) and has gained a reputation for breezy, fun French fashion.

Walking into La Droguerie for the first time felt a bit like being a kid walking into Willy Wonka’s chocolate factory.

I’ve been to my share of local yarn stores, but I’d never seen such an amazing variety of buttons, ribbons, fabrics, or yarn. What drew me to La Droguerie was their extensive offering in their own line of yarns – which includes a sizeable variety of plant-based, animal-based and recycled yarns all produced and dyed at the Couleurs & Textiles dye house on the banks of the Sèvre Nantaise in Mallièvre.

The shopkeepers store large, unwound hanks of yarn on racks, alongside swatches with information about what size needles to use and gauge obtained – which I absolutely loved! – and once you’ve chosen a yarn base and color, they hand-wind the yarn for you to the nearest 10g so you get exactly as much as you want.

I went to La Droguerie with a clear idea of what yarn I wanted – after hours of internet research before arriving in Nice – but once I got to touching the yarns and imagining sweaters in all of their different fiber blends, choosing only one or two was the hardest thing.

In the end, I bought a sweater quantity’s worth of their alpaca/plumette blend, which is achieved using two separate yarns – 100% pure long-fiber combed alpaca and a mix of 70% superfine mohair + 30% polyamide – in two different colors for a marled effect. I also bought two small cones of their petite laine à tout faire (small wool to do everything) for a future hat or cowl for my boyfriend.

We left happy, but I sheepishly returned a day before the end of our trip to pick up a sweater quantity’s worth of duvet d’anjou – a beautiful, warm yarn made from 70% wool and 30% rabbit angora – in the most gorgeous rich red clay shade. I am so in love with my new yarns, and absolutely cannot wait to start swatching and designing with them!

For anyone headed to Nice (or for any large French city for that matter), I highly recommend popping into La Droguerie to squish some yarn, pick out some beautiful notions, or maybe shop for a few meters of their wonderfully whimsical fabrics if sewing is more your jam.

The people who work there are so warm and welcoming, and the atmosphere of the boutiques itself is an experience that feels like any fiber artist’s dream come to life. Trust me – you don’t want to miss it!